One year on: how COVID-19 lockdown affected ecommerce 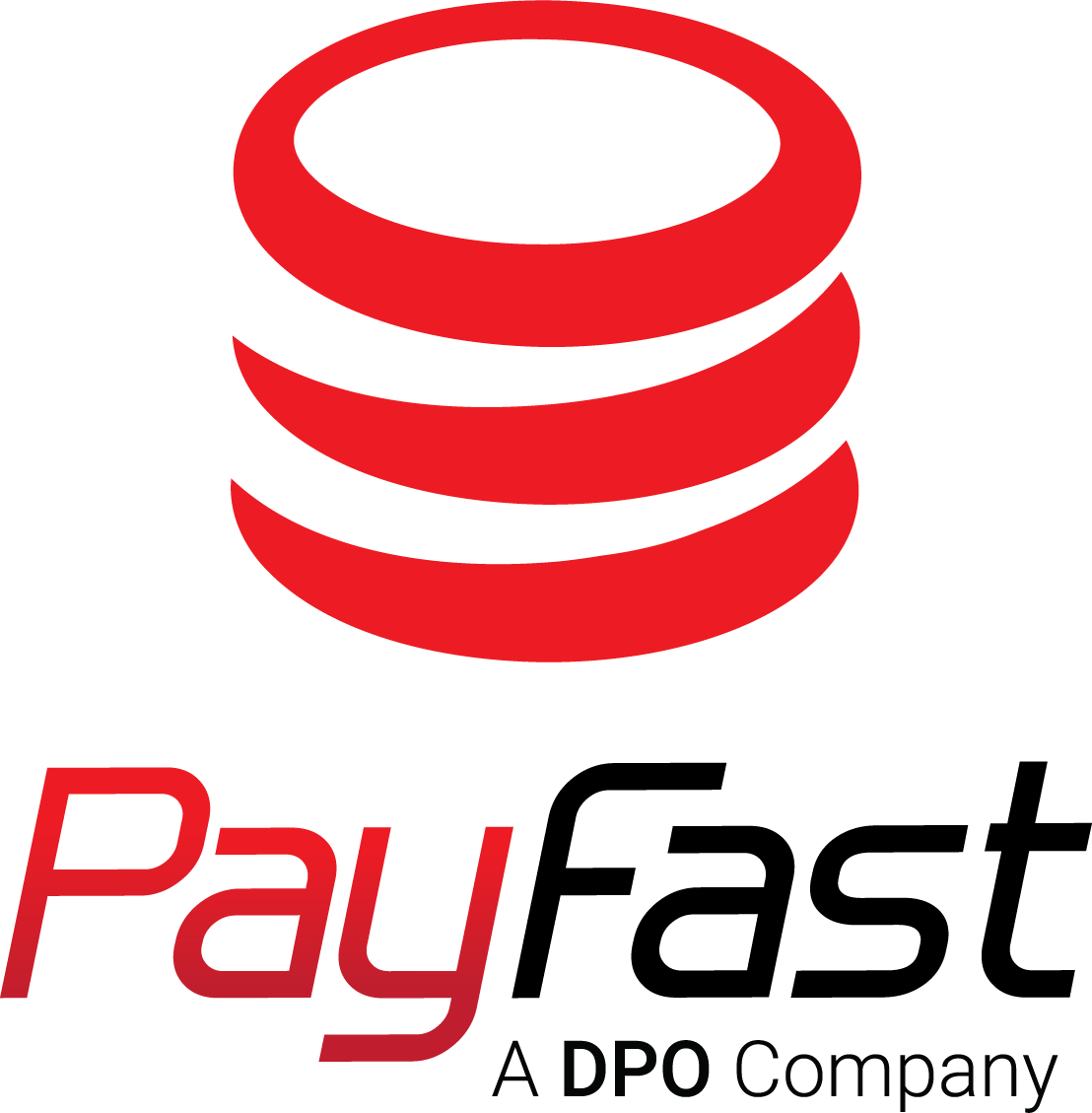 We’ve officially hit the one year anniversary of COVID-19 lockdown, and wow what a year it’s been. What feels like a lifetime ago, on 26 March 2020 the South African government initiated a nation-wide level 5 lockdown in order to curb the spread of the pandemic. The extreme level 5 restrictions required everyone to stay at home unless they had to buy essential goods or seek medical treatment. Even though ecommerce was mostly forbidden during level 5, unless for essential items – which was a rather bizarre list back then, it soon became clear that ecommerce would come out as the clear winner and thrive from lockdown and social distancing.

Looking back, it’s clear the local ecommerce industry boomed. Ecommerce catered to the heightened demand of consumers wanting to shop online from the comfort and safety of their homes. On the flip side, ecommerce also provided new opportunities for businesses that were caught off guard by the restrictions and unable to generate revenue and pay their employees.

Reviewing our data from the past year, specifically from 1 March 2020 to 28 February 2021, we’ve come to some interesting conclusions about lockdown’s impact on ecommerce in South Africa.

Since the start of lockdown in March last year, PayFast received over 40,000 new account registrations. Of these new signups, Business accounts more than doubled compared to the previous year, and Cause accounts increased by 30%. This is due to businesses moving online to meet demands of their customers, as well as charities and nonprofits who were looking to conveniently accept online donations during this financially strained time.

When examining the new PayFast registrations between March 2020 and 28 February 2021, we were able to get a good overview of what industries were the most eager to get online. Compared to the same period the previous year, the industries that saw the most new account registrations were the food industry (considered essential during level 5) followed by baby goods, home, beauty and then clothing. Meanwhile, not surprisingly, the travel industry experienced a drop compared to the previous year, as well as the ticket industry. 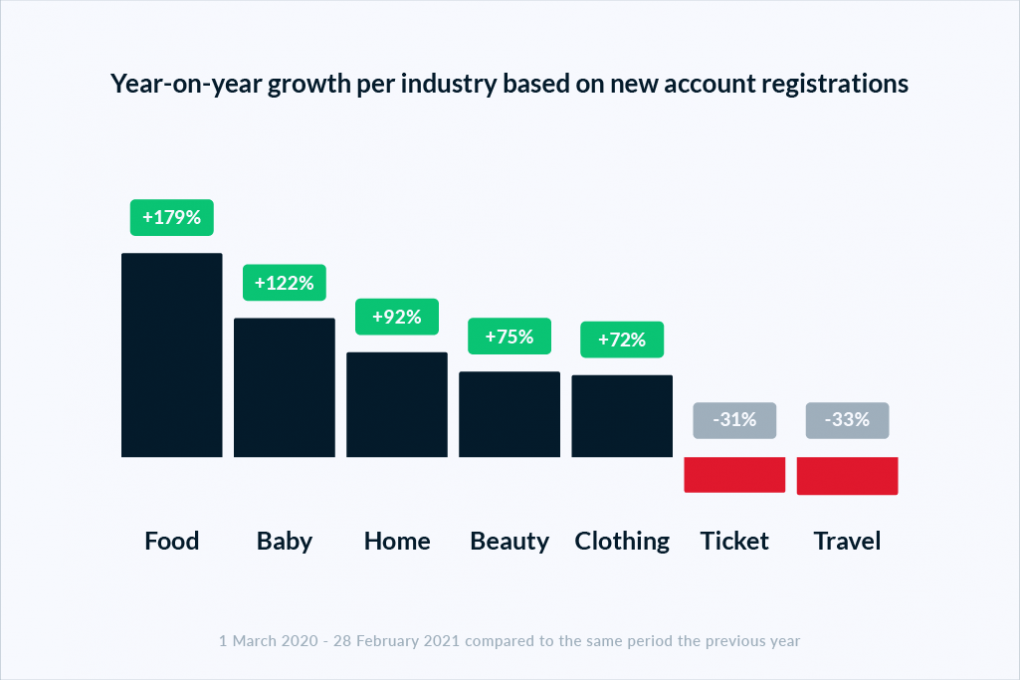 When analysing the year-on-year growth of different segments based on the number transaction processed in the past 12 months, we found that the top five industries with the highest growth were as follows: 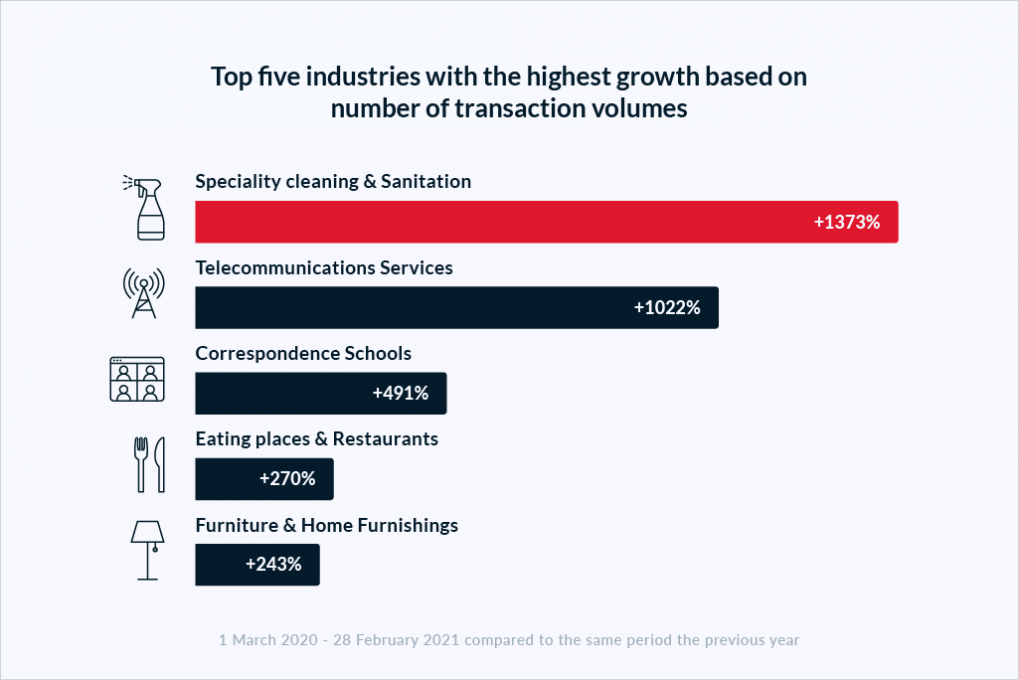 Unsurprisingly, the industry that experienced the highest growth was cleaning and sanitation, which is a direct response to managing the COVID-19 pandemic. It’s also clear that people were trying to make the most of staying at home by investing in home decor and their education. The growth in online transactions in eating places and restaurants are most likely attributed to restaurants offering take away check outs online, an indication of consumers choosing not to touch and transact with physical money (and people).

Some of the biggest new growth industries we saw in during lockdown, based on number of transactions from merchants who registered and started transacting for the first time during the lockdown period, include the following: 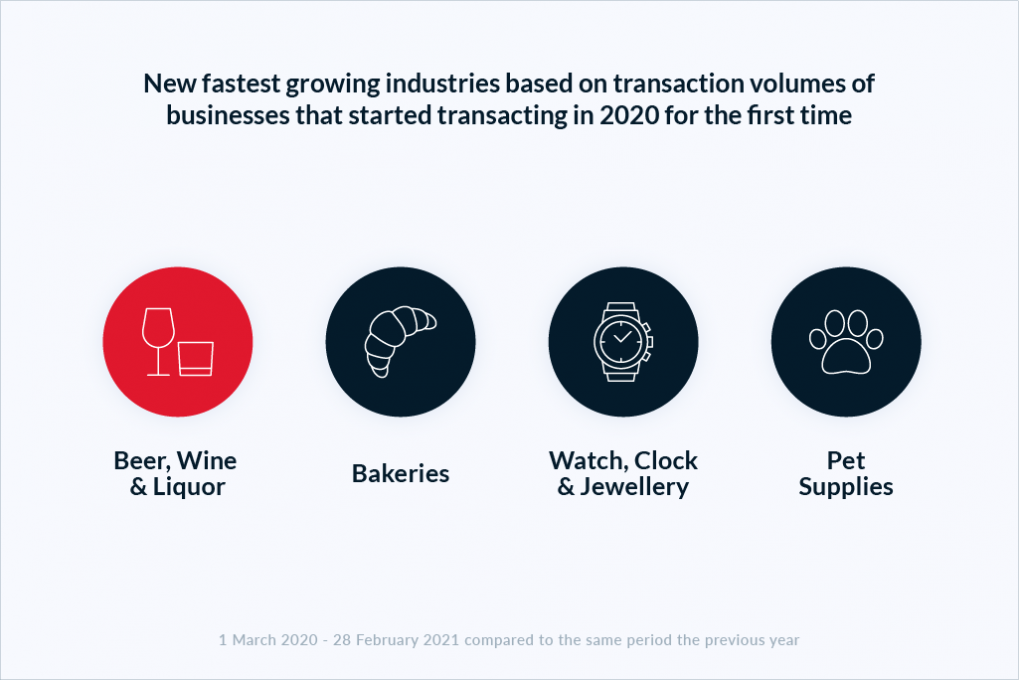 As shown above, micro brewers and winemakers generated an income online despite the alcohol bans by processing payments and delivering once the ban was lifted. This proved to be a life line for many businesses who normally relied on third party distributors such as restaurants.

Online payments have become the norm

Lockdown resulted in digital payments becoming the norm due to the convenience and safety it grants shoppers. Our data from the specified lockdown period indicates total payment volumes processed increased by 83%. This indicates that the initial surge in ecommerce experienced around May 2020 when retailers were closed but online delivery for non-essential goods was permitted, was sustained.

Of these transactions, although card payments and those made by Instant EFT continued to rise, by 99% and 91% respectively, what really stood out was the massive growth of QR or scan to pay payments. We recorded a whopping 412% growth in Masterpass payments compared to the same period last year. This is linked to the growing use of contactless payments in physical stores, where shoppers are choosing to download apps like Zapper and SnapScan to make payments using their smartphones to avoid touching surfaces. 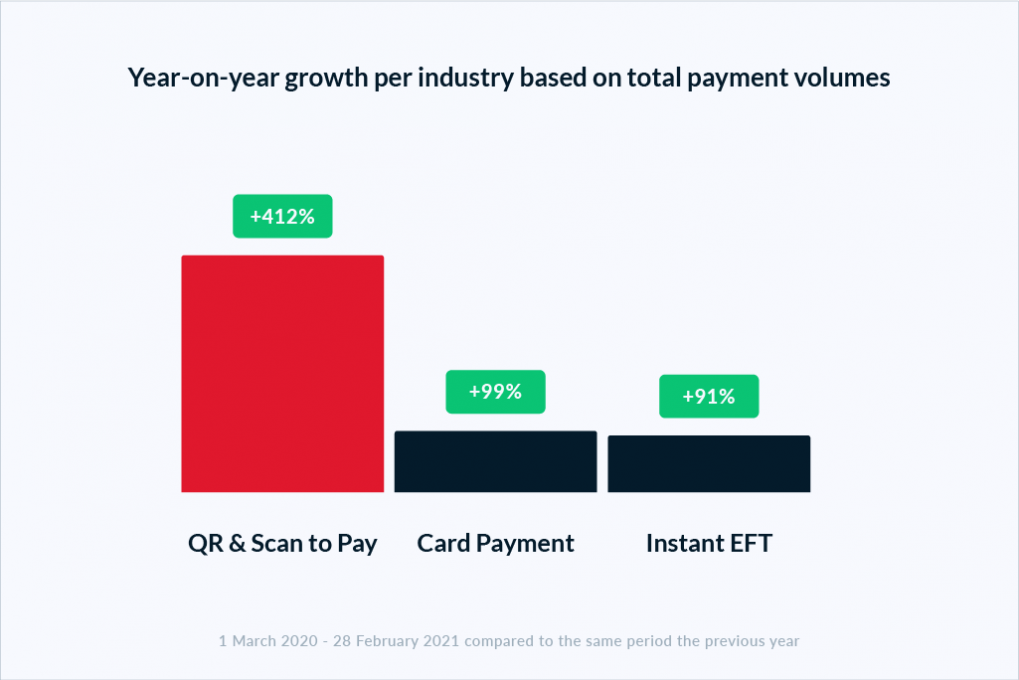 Continuing on trend, mobile usage dominated the lockdown period, with over 68% of shoppers checking out using a mobile device. Mobile payments also increased by 143% year-on-year, indicating that consumers are using their mobile devices more and more to make online purchases via digital wallets that scan QR codes, Instant EFT and card payments. This reinforces the need for online stores to be mobile-friendly to ensure the best shopping experience for buyers.

Ecommerce is not going anywhere

More than 7 million users were recorded on the PayFast payment engine over the last 12 months, indicating the eagerness of consumers who were, and still are, willing to shop online and make payments online. Based on all of the growth we recorded over the past year, we’re confident that we’ll continue to see the growth of digital payments in South Africa in years to come.